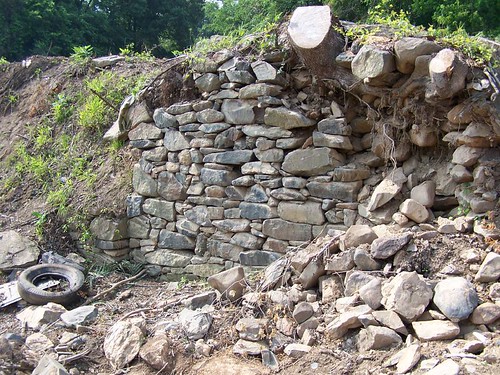 Martha (McFarland) McGee was a widow with five children when she married Captain William Bell in May of 1779. Bell owned Bell’s Mill, circa 1725, located in Randolph County, North Carolina. While Captain Bell, an officer in the North Carolina militia, was away serving his county, his new wife Martha operated the mill.

In 1781, after the Battle of Guilford Courthouse, Lord Cornwallis went ahead to Bell’s Mill to confiscate corn and meal for his army, while he briefly occupied Mrs. Bell’s home as his headquarters.

Mrs. Bell confronted the British general to ask if he was planning to torch the mill when he finished grinding meal for his troops. She told him that if he planned to destroy the mill, that she would to burn it herself. Bell’s Mill was spared and continued in operation.

The image, North Facing Foundation Wall, and Trash Heap, is subject to copyright by gstrader. It is posted here with permission via the Flickr API by barneykin, administrator of “The Revolution

This entry was posted on Wednesday, November 29th, 2006 at 8:57 pm and is filed under Revolution. You can follow any responses to this entry through the RSS 2.0 feed. You can leave a response, or trackback from your own site.

12 Responses to Cornwallis and Bell’s Mill