Marx “Warriors of the World” toy soldiers with tin “Sons of Liberty” tavern in the background. A wonderful Christmas gift in days of yore.

The image, Spirit of ’76, is subject to copyright by Marxchivist. It is posted here with permission via the Flickr API by barneykin, administrator of “The Revolution

The people of Baltimore built the first large-scale monument in the nation to George Washington in 1809, just ten years after his death. Read of the history of the Washington Monument at Mount Vernon Place, Baltimore.

The image, PC091062, is subject to copyright by Elwyn. It is posted here with permission via the Flickr API by barneykin, administrator of “The Revolution 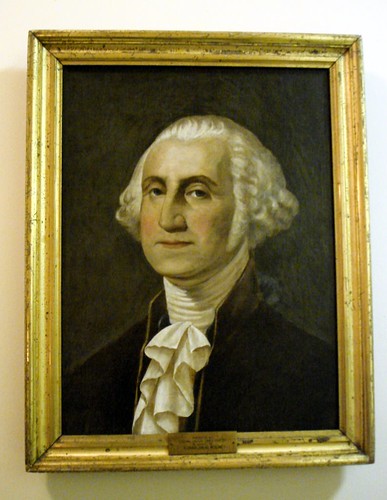 Religion played the major part in the observance of Christmas by George and Martha Washington at Mount Vernon. Occasionally they attended church on Christmas morning at nearby Pohick Church, returning to Mount Vernon for dinner. During his first year as president, George Washington attended Saint Paul’s Church in New York City on Christmas day, which fell on a Friday.

There were no decorated Christmas trees at Mount Vernon as the first one did not arrive in Virginia until 1842, when a German professor at Williamsburg displayed one. Obviously that custom caught on fast. There were no stockings hung by the fireplace awaiting Saint Nicholas, as that was a part of Dutch New York, and not a tradition in Anglican Virginia. However, the Virginians managed to have a happy time bringing together family and friends with good food and a day of respite from work.

The image, George Washington, is subject to copyright by barneykin. It is posted here with permission via the Flickr API by barneykin, administrator of “The Revolution

Robert and Hannah Thompson were the owners of the Thompson-Neely House during the American Revolution. Now located at Washington Crossing Historic Park, it was one of the local houses, known as “flying hospitals”, used by the Army during the bitter winter 1776/1777. The hospital was probably attached to General Lord Stirling’s brigade, although he never had his headquarters here.

General Lord Stirling was the commanding officer of the American troops encamped along the Delaware River.

After the first Battle of Trenton, future American President James Monroe and William Washington, of Lord Stirling’s Brigade, were believed to have been brought back to the Thompson-Neely House to heal from the severe wounds they received in battle.

The image, Thompson-Neely House, is subject to copyright by Philly Stan. It is posted here with permission via the Flickr API by barneykin, administrator of “The Revolution