Benedict Arnold was wounded in action twice, both times in the leg, while fighting with the rebels at Quebec and Saratoga. This monument honors his leg only, as he later switched sides and betrayed his country.

During his 1777 campaign, British General Burgoyne attempted to split New England away from the rest of the colonies. At Breyman Redoubt on the Saratoga battlefield, American forces, rallied by Benedict Arnold, broke through the British defenses, forcing a retreat of Burgoyne’s remaining troops. A few days later the King’s army was surrounded and forced to surrender.

Without the heroic actions of Benedict Arnold, the Americans would not have won the Battle of Saratoga. It was possibly during his long recuperation from the severe leg wound that he received there, he fell under the influence of his loyalist in-laws, and turned traitor. According to period letters and diaries, they worked on him incessantly, reminding him of the disrespect that General Gates had shown to him by relieving him of command just before the battle.

Some historians believe that had he not turned traitor, he would have gone down in history as one of America’s greatest patriots – almost at the lofty heights of John Adams, Thomas Jefferson and George Washington. Now his name is much worse than Dr. Mudd’s.

This image was made in Saratoga County, New York (map).

The image, Monument to Benedict Arnold, is subject to copyright by Captain Oblivious. It is posted here with permission via the Flickr API by barneykin, administrator of “The Revolution

“First in war, first in peace, first in the hearts of his countrymen.”

George WASHINGTON (1732 – 1799) was born on February 22, 1732, at “Popes Creek”, a home that his father had built in the 1720s in Westmoreland County, Virginia. In 1770, “Popes Creek” was renamed “Wakefield”, and on Christmas Day of 1779, Washington’s birthplace burned to the ground, leaving only the crushed oyster shell foundation remaining. George Washington was raised there and in Fairfax and King George Counties, Virginia.

The image, Wakefield Historical Marker, is subject to copyright by jeffq. It is posted here with permission via the Flickr API by barneykin, administrator of “The Revolution

George Washington, America’s first and greatest president, is one of four American presidents carved into the granite at Mount Rushmore, South Dakota.

The image, George W., is subject to copyright by bridgepix. It is posted here with permission via the Flickr API by barneykin, administrator of “The Revolution 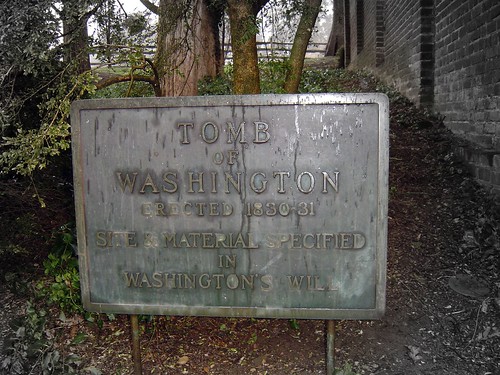 George Washington died in his bedroom at Mount Vernon on December 14th, 1799. His will directed that he be buried on the grounds of his beloved estate where he had selected a site for a new brick tomb to replace the original burial vault which was badly weathered and succumbing to the elements. However, the new tomb was not completed until more than thirty years later. It was in 1831, that the earthly remains of George and Martha were removed there. Every day from April through October a wreath laying ceremony is performed at 10 am and 2 pm in tribute to America’s greatest leader.

The image, Washington Tomb, is subject to copyright by barneykin. It is posted here with permission via the Flickr API by barneykin, administrator of “The Revolution

However, not everyone has forgotten the greatness of the man Washington. At his old plantation home on the Potomac River, General George Washington will be receiving birthday greetings in person, as he did so graciously in olden times. MountVernon.org

The image, Midnight Obelisk – The Washington Monument, is subject to copyright by Stuck in Customs. It is posted here with permission via the Flickr API by barneykin, administrator of “The Revolution

“. . . no regiment is to be seen in which there are not negroes in abundance: and among them are able-bodied, strong, and brave fellows.” —Hessian Officer’s Testimony, October 23, 1777

On January 2, 1778, Washington forwarded a letter from General James Varnum to the governor of Rhode Island advising that his troop quota should be completed with black soldiers. In February of 1778, the Rhode Island legislature approved the request. Enlisted slaves were to receive freedom in return for military service. White Quaker Christopher Greene led Rhode Island’s first black regiment at its first engagement at the battle of Newport, July 29-August 31 1778, where it held off two Hessian regiments. This same regiment also participated at the battle of Yorktown. Slaves who enlisted in the Continental Army rarely received regular pay or bounty land. Their rewards were subsistence, freedom, and a cash payment at war’s end according to “The George Washington Papers at the Library of Congress“.

“During the winter of 1777-78, dozens of black Virginians served in every one of the state regiments, freezing, starving, and dying at Valley Forge. By February 1778, the survivors were marching with white comrades through the snow, practicing Baron von Steuben’s as yet unfamiliar drill. When the Steuben-trained army proved its mettle at Monmouth in June, about 700 blacks fought side-by-side with whites. Eight weeks later, an army report listed 755 blacks in the Continental Army, including 138 Blacks in the Virginia Line.” from  (“The Revolution’s Black Soldiers” by Robert Selig)

Thaddeus Kosciuszko had come to America as a young man from Poland to offer his skills to the Revolutionary army. His life has got to be one of the most interesting of the American Revolution characters.

Kościuszko had been born in Lithuania-Poland and very well educated in military art and engineering. After the conquest of his country and the resulting cutbacks of its military, he went abroad where he was recruited in France by Silas Deane and Benjamin Franklin to help their American cause for freedom. In August of 1776, he arrived in America and began service as a volunteer. On 18 October 1776, Congress commissioned him as a Colonel of Engineers in the Continental Army, where he eventually became the head engineer.

While serving with the Continental Army, he read the Declaration of Independence and was greatly affected by it, as he found that it encompassed everything that he himself had always believed. Thereafter, he became a kindred spirit of the author of the Declaration, Thomas Jefferson, and spent many visits at Jefferson’s Virginia home, Monticello.

Kościuszko’s efforts added greatly to the American army. After the battle of Ticonderoga, General Washington put him in charge of military engineering at West Point, New York. Eventually Kosciuszko requested service with the Southern Army where he contributed even more to American victories.

After seven years of service, on 13 October 1783, Kościuszko, considered one of the greatest engineers in America, was granted American citizenship and promoted to Brigadier General. He was also admitted to the prestigious Society of the Cincinnati, one of only three foreigners allowed entrance.

The image, General Thaddeus Kosciuszko Monument, is subject to copyright by sheena1chi. It is posted here with permission via the Flickr API by barneykin, administrator of “The Revolution