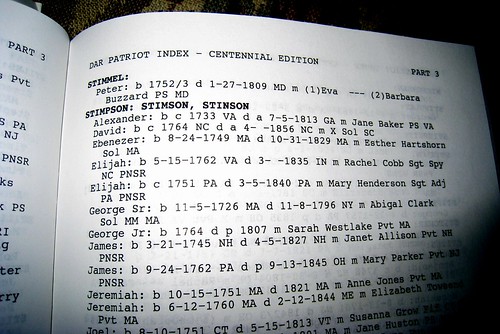 STIMPSON, STIMSON, STINSON Patriots of the American Revolution. The next edition of the DAR Patriot Index will include my two ancestors from Virginia, Alexander STINSON Senior, father of the listed Alexander (c1733-a1813), and his son David STINSON, both of Buckingham County, Virginia.

Father Alexander STINSON was an old man during the war, however he did contribute supplies to the rebels. It is impossible to know what other support these men may have given to the Patriot Cause, as all the records at Buckingham County Courthouse were burned in 1869 – not by the Yankees, but by arsonist Virginians! We do know that the people of Buckingham County were in the forefront of the movement for liberty, and that many of the county’s citizens must have formed Committees of Safety and more.

My forefather, David STINSON, contributed 400 pounds of beef to the American Revolutionary cause in Buckingham County, Virginia, which qualified him to be a DAR patriot. However, David STINSON did much more to show his true colors during a time of great danger. From some Virginia petitions stored at the Library of Congress I have discovered that my ancestor David STINSON was amongst Buckingham County’s staunchest patriots.  On 7 December 1780, he signed a petition that demanded the privileges of citizenship be withheld from all who refused to swear allegiance to the new American government. He demanded that these “non-jurors” not be allowed to practice law, medicine, and that “non-juror” clergy be silenced and deprived of their benefices. In addition, as a petitioner, he demanded that the non-patriots be double taxed. At that point in history, the South had become the war’s battlefield, and the army of Washington was not assured victory. The cities of Augusta and Savannah in Georgia had fallen to the British. If the American rebellion had been put down, David STINSON and the other petition signatories would have suffered grave consequences.

After gathering together all the historical documents necessary to prove my STINSON lineage to NSDAR standards, no easy feat in a Virginia burnt county, I decided to write a book on the STINSON family of Buckingham County. It is SO OBSCURE A PERSON – The Story of Alexander STINSON and His Virginia Descendants.   ~~Edna Barney

The image, DAR Patriot Index 2000, is subject to copyright by barneykin. It is posted here with permission via the Flickr API by barneykin, administrator of “The Revolution

Few of America’s founding fathers have had a more lasting impact upon our nation than a shy, cerebral planter from Virginia, a Fairfax County neighbor of George Washington, George Mason of Gunston Hall.

“All men are born equally free and independent, and have certain inherent natural rights, of which they can not by any compact, deprive or divest their posterity; among which are the enjoyment of life and liberty, with the means of acquiring and possessing property, and pursuing and obtaining happiness and safety;“ proclaimed George Mason to Virginia’s patriots and to the world, in the spring of 1776.

Closet Tories and aristocrats trembled with fear at the idea of all mankind being equally free, but George Mason’s wondrous words of hope survived, promising human rights for all. When you demand your rights, say a prayer of gratitude to George Mason of Virginia, father of the Bill of Rights. The Fifth Virginia Convention of 1776, on June 12th, adopted George Mason’s Declaration of Rights, a precursor to the United States Bill of Rights. On June 29th, the Convention approved the first Constitution of Virginia.

This statue of George Mason is seen at the Welcome Center at his home, Gunston Hall, Mason Neck, Virginia. There is more at My Picasa Albums picasaweb.google.com/barneykin/GunstonHall.

The image, George Mason, is subject to copyright by barneykin. It is posted here with permission via the Flickr API by barneykin, an administrator of “The Revolution

Birthplace of the United States of America

Today Independence Hall seems almost miniature with the modern city of Philadelphia that has grown around it. However, during the formative years of a new nation, Philadelphia’s Independence Hall played a giant role as the birthplace of the United States. The documents written and approved by the patriots who met here created the foundations of a government which has stood for 230 years.

When it was built in 1732, Independence Hall was considered a most ambitious project for the colonials. Finished in 1756, it served as the capitol building of the Colony of Pennsylvania. The Second Continental Congress met here in 1775. That illustrious body adopted the Declaration of Independence on July 4, 1776. The document was first read in public in Independence Square four days later.

The image, Independence Hall – Philadelphia, Pennsylvania, was originally uploaded by Michael6076. It is posted here from Neddy’s