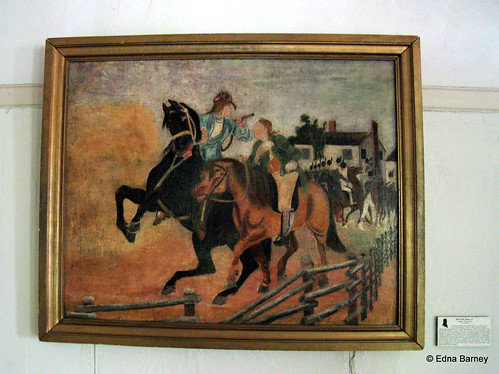 From my genealogical research, so far, I have discovered that my Virginia-born mother was descended from twenty-nine American patriots who assisted in the making of America. The following are my mother’s known ancestors who risked their lives and fortunes. May their names live for evermore.

Nathaniel Clarke was certified for a public service claim in Amherst County, Virginia. He is also recorded in the Amherst County Register of Revolutionary War soliders.

☆★ At a court held at Fluvanna County, Virginia on Tuesday, 9 April 1782, George Cox was certified by Thomas Napier for a public service claim of 240 pounds of beef, dated 28 November 1781.

☆★ On 1 June 1779, Thomas Craig, along with Thomas Jefferson, was one of the signatories to the Albemarle Declaration of Independence. The original copy is preserved at The Virginia Historical Society in Richmond. Thomas Craig was compensated for three Public Service Claims in Albemarle County, Virginia during the Revolution; one for 270 pounds of beef for State use, the second for 2 1/4 gallons whiskey and the third for 222 pounds of beef for Continental use. See Albemarle County Patriots.

☆★ Leonard Drumheller was drafted into the Virginia Line in January 1781, at the age of 17, as a fifer and marched from Albemarle County, Virginia to Richmond where he drew arms and thence went to Williamsburg. From Williamsburg he was marched to the halfway house between York and Hampton where he was stationed for a time before returning to Williamsburg and Richmond. There he was discharged in March 1781, and he returned home. In May 1781, Leonard was drafted into the militia and again marched from Albemarle County, this time under Captain Marsh Leake in General Lafayette’s army as a Private. He was discharged July 1781. Soon afterwards he was detached in the minute service and was there until after the surrender of British General Cornwallis and peace was declared, between 1 August 1781, and late October. He applied for a Revolutionary War Pension from Albemarle County on 12 October 1832.

Peter Hackett lived in Buckingham County, Virginia. During the American Revolution he served with the 9th Continental Line as a Sergeant Major.

Colonel Burr Harrison attended The Third Virginia Convention at Henrico Parish Church in Richmond, Virginia on 17 July 1775, to organize troops and the war effort in order to defend the colony against invasion. The Convention acknowledged the debt to Patrick Henry whose wisdom had already begun the arming of the colony. In August 1775, he sent a letter from the convention to his son-in-law, Leven Powell, which is preserved in Leven Powell’s papers at the Library of Congress.

☆★ Nehemiah Hundley served as a soldier in Virginia and Pennsylvania. As a very young man he was impressed to convey a package from Prince Edward County, Virginia to Fort Pitt in Pennsylvania during the Revolutionary War. While there, in 1779, he enlisted in the service of General McIntosh’s 13th Virginia Regiment serving under Lieutenant William R. Withers. He was wounded in the arm and was discharged as an invalid at Pittsburgh, Pennsylvania. His military service is recorded in pension records in Virginia and in the Pennsylvania Archives.

☆★ On 1 November 1776, John Jameson of Albemarle County, Virginia signed a petition against the Church of England. His signature was next to the names of his neighbors Thomas Wharry, Samuel Jameson, Thomas Craig, John Craig, Thomas Jameson, Micajah Via, John McCord, Sam’l McCord, Wiliam Wood, and William Jameson, Jr. The petition was titled “Dissenters from the Church of England of Albemarle and Amherst Counties” and is referenced in “Virginia Historical Magazine”, volume 18, 1910, page 263. See Albemarle County Patriots.

★ George Naylor enlisted on 4 July 1776, and his name is on the Muster Roll of Maryland Troops in the American Revolution. He served as a Private among the troops raised by Ensign Alex Trueman, for Captain Magruder’s Company in Prince George’s County, Maryland. As George Naylor, son of Batson Naylor, he is recorded on “A roll of the Guard kept at Magruder’s Warehouse that were from Captain Benjamin Wailes’s Company of Militia of the Lower Battalion”, in Revolutionary Papers recorded at Prince George’s County, 27 May 1782. George Naylor, the son of Batson, also signed the Oath of Fidelity in said county where he was recorded on Fielder Bowie’s Return of 30 March 1778.

☆★ In the year 1779, George Norvell swore the Oath of Allegiance to the American Revolution in Albemarle County, Virginia, recorded in the Goochland County Order Book 12, page 503. On 21 June of that same year, he was a signatory to the Albemarle Declaration of Independence, along with Thomas Jefferson and other prominent citizens, the original document preserved at the Virginia Historical Society, Richmond.

★ On 9 October 1777, in Goochland County, Virginia, James Norvell signed the Oath or Affirmation of Allegiance and Fidelity. In 1782, he supplied 25 bushels of corn to the patriot cause for the Continental Army in Goochland County.

★Littleberry Patteson served as a sergeant during the Revolution in the company of Captain Samuel Jordan Cabell, 6th Virginia Battalion of the Continental Forces, from April to July 1777. He also served in Morgan’s Rifle Regiment.

★Obediah Patterson provided diets and forage for two beefs to the Revolutionary cause in Bedford County, Virginia.

John Peyton was certified for a public service claim in Culpeper County, Virginia.

Mrs. Seth Peyton furnished one beef to the Revolutionary cause in Prince William County, Virginia about 1779 to 1781.

☆★ On 16 August 1777, John Poor and his brother Robert signed the Oath of Fidelity in Goochland County, Virginia. He was drafted during the Revolution and served as a Private in the Virginia Line of the Continental Army for a term of twenty months. In his pension application, S38314, he stated “he was drafted as a private soldier of the war of the revolution on the continental establishment the twentieth day of March 1781 in the county of Albemarle and marched from thence to Chesterfield Court-house where he was allotted to the company commanded by Captain Robert Gamble of the 8th regiment of the Virginia line – That he was at the siege of York in Virginia at a skirmish in Georgia near Savanna and engaged in an attack by the Indians and having served until the 5th day of November 1782 and was then regularly discharged by Genl Charles Scott at Cumberland Court-house in the State of Virginia”.

★ John Spencer furnished blankets and a pair of stockings to Captain Walker’s Continental Troops, 1779-1781, in Albemarle County, Virginia. His sons served as soldiers during the American Revolution. Son Thomas Spencer was killed at the Battle of Guilford Court House.

☆★ David Stinson contributed 400 pounds of beef to the American Revolutionary cause in Buckingham County, Virginia, which qualified him to be a DAR patriot. However David STINSON did much more to show his true colors during a time of great danger. On 7 December 1780, he signed a petition that demanded the privileges of citizenship be withheld from all who refused to swear allegiance to the new American government. He demanded that these “non-jurors” not be allowed to practice law, medicine, and that “non-juror” clergy be silenced and deprived of their benefices. In addition, the petitioners demanded that the non-patriots be double taxed. At that point in history, the South had become the war’s battlefield, and the army of Washington was not assured victory. The cities of Augusta and Savannah in Georgia had fallen to the British. If the American rebellion had been put down, David STINSON and the other signatories would have suffered grave consequences. ☆☆He is NSDAR Patriot Ancestor #A204931. (See The Stinson Book.)

☆★ Micajah Via signed a petition in Albemarle County, Virginia, on 1 November 1776, entitled “Albemarle, Amherst Dissenters of Disestablishment and Religious Equality” (“Virginia Historical Magazine”, volume 18, 1910, page 63). This was almost four months after the signing of the American Declaration of Independence. Since that glorious day the petitioners in Albemarle and Amherst were aware that 30,000 British troops had arrived in New York, that their American forces were roundly defeated at the Battle of Brooklyn, that the enemy British were occupying New York City, that the American ragtag army was routed at the Battle of Harlem Heights, defeated by the British at Lake Champlain, and that American troops were forced to retreat at the Battle of White Plains just three days prior.

In the face of all of that, they addressed their words to the “Delegates & Senators, Representatives of the Common Wealth of Virginia at the City of Williamsburg” stating “in consequence of our having thrown off our dependence on the Crown & Parliament of Great Britain.” They closed by ardently wishing that the new Virginia “Commonwealth may become the envy of the Nations & the Glory of the World.” See Albemarle County Patriots.

★ William Via lived in Brown’s Cove, Albemarle County, Virginia. He was drafted for the Revolutionary cause for a term of 18 months on 20 March 1781, and served as a Private in a company commanded by Captain Beverly Roy in the Regiment commanded by Colonel Posey, Virginia Line on the United States Establishment. He served eighteen months and was discharged honorably.

Jesse Sairs of Albemarle County, Virginia gave affidavit that he entered service with William Via under the command of Benjamin S. Sairs, Captain of the militia of the State of Virginia by whom they were marched to Chesterfield Courthouse, the place of rendezvous of the United States troops then commanded by General von Steuben . William Via was under the command of Colonel Gaskins in the Virginia Line on the United States Establishment. From that place of rendezvous they marched with the Second Virginia to the Point of Forks (a military depot to ship goods to Richmond, now known as Columbia, on the Rivana River), thenceforth they were marched under the command of General von Steuben to North Carolina, from there counter marched to the Siege of York in Virginia where they were remanded until the close of the siege. From there they went to Cumberland Courthouse to Winter Quarters. William Via was then marched to Georgia. Returning to Virginia, he was discharged 1 November 1782, by General Seath at Cumberland Courthouse.

Edward Walton was issued a certificate for providing 375 pounds of beef to the Revolutionary cause in Hanover County, Virginia, between February 1780 and March 1782.

★ This lineage was proven by Edna Barney.

☆★ This new lineage was proven and opened for NSDAR members by Edna Barney.

The image, My Insignia, is subject to copyright by Edna Barney. It is posted here with permission via the Flickr API by barneykin, an administrator of “The Revolution

63 Responses to My Patriot Ancestors